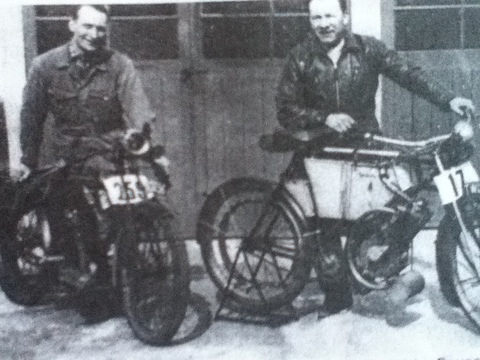 Peter's uncle Harry with the Zenith and Charlie Murray with the Coventry Eagle
Peter Murray the owner of Murray's Motorcycles, was born  in the town of Atheston, Warwickshire, England in 1939, the  son of Charles and Emily Murray. In the year 1953, they  decided to move to the Isle of Man, into a property known  as 'Santon Villa', in the village of Santon. This was the  location for the start of the Murray's Motorcycle. Peter's  dad Charlie, started to collect motorcycles and  memorabilia for the museum' and the first motorcycle he  bought was a Coventry Eagle, a motorcycle built in 1903.  He bought it from Tom Moore of Billown, The registration  MN 30, was put onto Peter's van before the bike was sold,  quite a few years ago...
After collecting motorcycles and memorabilia for 10 years  it was time to look for a bigger place for the museum  collection, but continue to live at Santon Villa. The Museum  moved to Christian Street in Peel in 1964, and stayed there  for 5 years. Restrictions on the museum advertising in Peel  became a sore point, so it was time to move on yet again.
It was to place a that was to become the World Famous Murray's Motorcycle Museum at the Bungalow on the T.T. course. For motorcycle enthusiasts and as a tourist attraction, it was the place to visit. Lots of vintage and very rare motorcycles were on display', as well as plenty of memorabilia. As time went on it became more and more expensive to run the museum, as the running costs were paid by the Murray family, with no grants or funding whatsoever from the Isle of Man. The lease on the building was due to be renewed, and the rent was to increase. The only money coming in was via a donation box on entering the museum, and the buying and selling of some of the stock. So after 37 years, the son, Peter, decided to move from the T.T. course. In 2006, Peter got in touch with Steve Griffith, who is the son of John Griffith, the road test journalist for 'The Motorcycle' magazine, an avid collector of rare motorcycles. Steve, who is also a Motorcycle and Memorabilia dealer, was called upon to help sell some of the bikes that had been in the Murray's Museum. The sale of some of the motorcycles would help finance the move and restock the museum with road and race bikes from a more modern. One of the motorcycles that proved to be the most sought after, on display and for sale, was a Honda works 125cc twin cylinder, the racer from 1961. This was the bike that was given to Charlie for Mr. Honda's private collection. In the mid 70's, Mr Honda was on a world tour and made a visit to 'Murray's', whilst on the Isle of Man. Charlie asked Mr Honda through an interpreter, if it would be possible to have a Honda race motorcycle for the museum. When he returned home to Japan, he sent the 125cc racer as a gift. During the sale the motorcycles in 2006, Peter got in touch with Honda, and they informed him that they would like to 'buy' back the bike, so a price was agreed on and the bike went back to Honda Japan. As this motorcycle had come from Mr Honda's private collection, Honda were keen to have it back whatever the cost. The motorcycle was probably the race bike Kunimitsu Takahashi rode when he won the 1961 Ulster Grand Prix, and not the bike that Mike Hailwood rode when he won the 1961 T.T.
About 80 motorcycles were sold over a short time. Peter then moved what motorcycles he managed to keep, along with a lot of new race and road bikes back into the place it all started, Peter's home at Santon Villa. It's now called 'Murrays Motorcycles', and is located on the left hand side, just before the Fairy Bridge, on the New Castletown Road, heading out from Douglas. It has now gone a full circle to where it began.